We strapped up for a promising 4 Wheel Off Road Tour last Sunday. Frankly, it was our first such experience and the kids were more excited than the Mister & me. 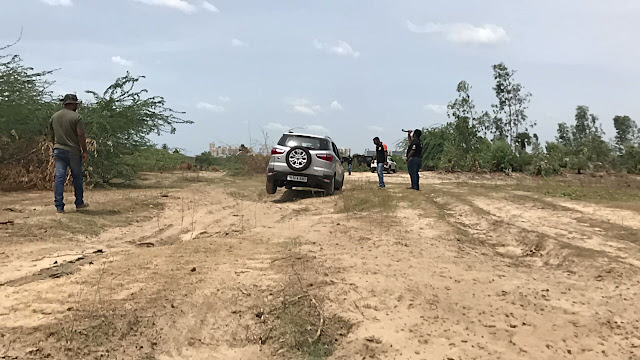 Organised by Terra Tigers, a measly group of few adrenaline road junkies assembled for the first session of the day even as the sun threatened to be scorching than ever before. 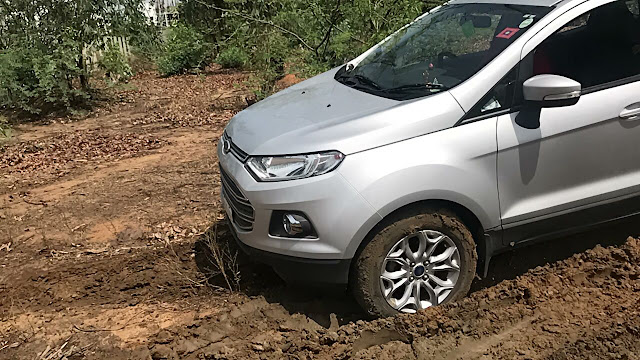 Ably kickstarted by Mr.Arun, with  a few questions that were supposed to be the ice breakers, we were then grouped in to cars that were 4 wheel rides and the ones that
were not. 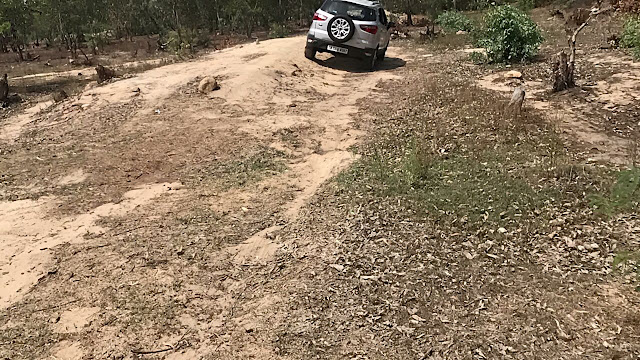 The next 2 hours was a thoroughly exhilarating experience as we under the thoroughly skilled and professional expertise of Arun & Co navigated our way over side slopes, steep climbs, gravelly tracks, muddy pits, obstacle maneuvering and sharp descents. 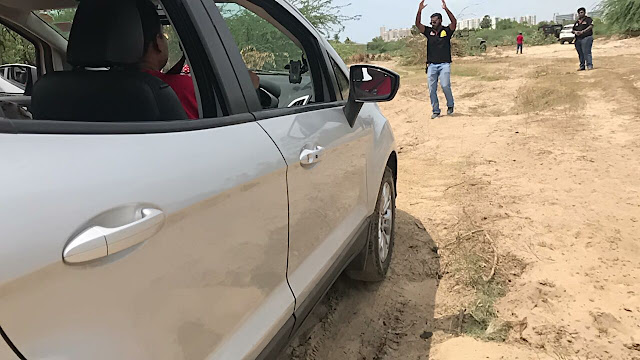 Hubby took to the off road course like a fish to water and I am sure he pushed himself to limits hitherto unexplored and gained immense confidence charting varying terrains. 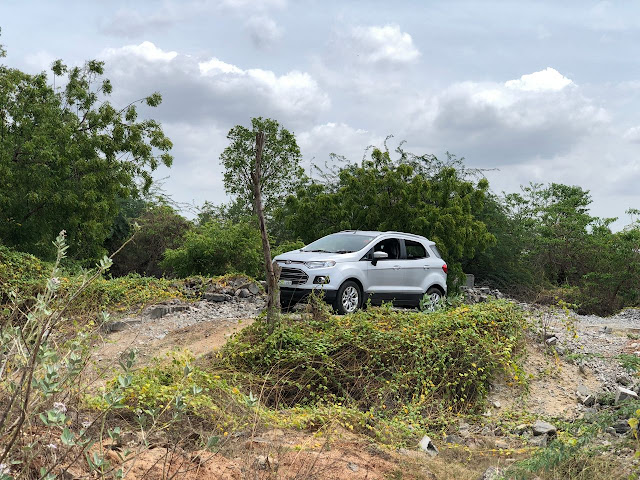 Our Ford Eco SPort not being a 4 by 4 drive could not handle a few manoeuvres like the slushy terrain for instance but for the most part of the experience, it was enriching. 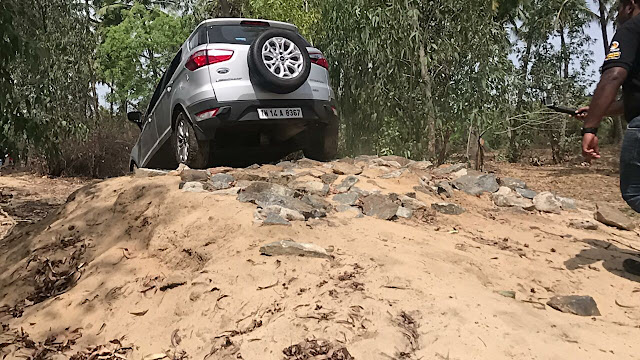 The session wound up with hubby and a few others taking over the reins of a jeep to get a grip of the 4 wheel drives, the accompanying nuances and promises for more such adventures !

Let me start by saying that what a spectacular casting this movie has ; it is lifted many notches by the sheer acting prowess of the lead cast. Vidya Balan as the aspiring middle class house wife and  Manav Kaul as the loving and sometimes the typical husband have aced the role and how ! The movie's review must have been done to death by all and sundry ; but I am going to put my dime or two on why the film is teri meri kahani.. 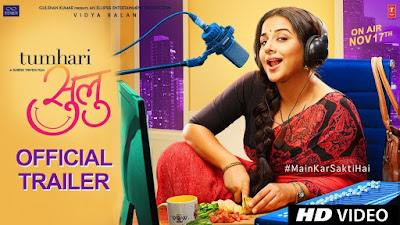 Vidya Balan is a home maker who aspires to break out of her housewife mold . Her family responsibilities so far had not allowed her to explore the possibilities of being a working woman and she partly makes up for it by participating in all competitions organised in the locality. She chances upon  an opportunity of becoming a night time RJ and there starts her shot at living the life she always imagined !The job is a midnight caper that needs speaking sometimes saucily to the late night callers and keeping the buzz alive .The movie thus to some extent explores the trials and tribulations of a working woman and succeeds at it.

Why I loved the movie ~

a)    At no point did I feel the film dropped its pace; it could have easily become a melodramatic affair but the actors including the supporting cast keep a tight leash on the proceedings and  sparkle in their respective roles.

b)    In many a households, we see the unfair comparison among the siblings, unintentional it may be; the jabs, the familiar taunts and the constant remainders of the failures of the lead by her twin siblings are shown here with a compelling sincerity.  The pangs and the aches that follow is noteworthy and I gave a quite salute to her for putting up with them !

c)    Many a times, the responsibility of rearing a child unfairly rests upon a mother alone  and the film poignantly portrays it. In a particular scene when the parents are summoned for a misbehaviour on part of the child owing to peer pressure, the father unknowingly makes it out to be a mother's fault. Vidya's superb acting touched a raw nerve somewhere and that is how winning her performance is !!

d) I loved the heart warming relationship between Sulu and her man ; the warm banter, the winks and their favourite song in SPB tone all these and more empowers the devoted companionship of the lead and makes us believe in them and root for them even more.

e) The movie showcases real life problems, the one you and me are aware of  ~ the instant stardom of the wife and the inadequacy of the husband to come to terms with her success , his own insecurities at his job front and a male chauvinism that pleadingly compels his wife to succumb to the family's wish of quitting her job are portrayed with an authenticity that is enchanting !

Frankly, if one were to critically discern this movie there would be many an eye sore but I totally want to soak up in the happy positivism of this film, and bask in the strong nod to the woman empowerment it highlights; It is high time we make more such movies and that alone will make up for any possible misses. And yes, I do look forward to how Jyotika adds her fervor in the Tamil remake of this movie.
Posted by Priya Sreeram at 2:38 PM 1 comment:

One movie that I was planning to watch in theatre a couple of months back, then recorded it a few times on TV but ended up watching only yesterday as part of a binge watching session was Magalir Mattum (Ladies only). The movie with the spirited Jyothika as the lead had me grinning, swaying and cheering for the characters in equal measure. This flick much like its namesake(the one which had the vivacious Revathi) is a joyride and a coming of age movie that keeps the viewers enthralled to the very end. 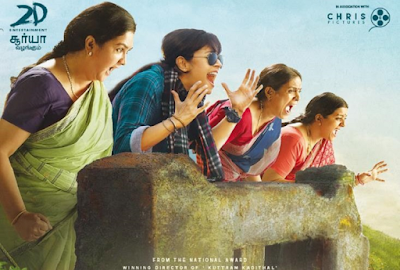 Jyotika, a docu film maker is a strong willed independent woman who takes it upon herself to bring back joie de vivre to her reel life would be mother -in-law Urvashi. When she learns of how her MIL misses her two dear friends of yore, she embarks upon a funride to reunite the three musketeers by taking them on a 3 day road trip to Chhatisgarh. Saranya & Bhanupriya are the two friends with whom Urvaashi has had much colourful school & hostel life history ; their friendship gets lost in the process of growing up in the humdrum of what we call life ! The three friends now all grown up and married have their own issues to deal with. Urvashi is widowed and her only son has left for foreign shores to earn a livelihood. Saranya the beautician is in a loveless marriage with an alcoholic and is also burdened with the task of taking care of her ailing mother in law while Bhanupriya married to a male chauvinist household has to combat everyday with her struggles of having lost her identity. How the women each with their own inner battles and demons to conquer rise up to the occasion and rightfully reclaim their joy for life is what the movie is all about.

What I loved about the movie :-


However a few things had me wishing for a better writing and etching of characters. For instance the movie's cliched tones on feminism and woman empowerment in the form of the over feisty Jyotika doling out advice is a little too much to digest.Women's lib as mouthed by her character belies reality. I wish it were that simple ! Also the men in the movie could have got a better deal.  Despite its shortcomings, its a visual delight with a heart tugging story and a must watch !
Posted by Priya Sreeram at 5:37 PM 1 comment:

Bhairava - Not a Godly Affair

Pongal Holidays and a movie of a big Kollywood star - a potent combo! I am not a huge Vijay fan but I did like the idea of watching the movie just a day after its release, if only to enjoy the cheap thrill of catcalls and whistles that accompany a mass hero's flick. And boy, I wasn't disappointed!

The film opened to raucous and incessant whistling and jubilant hand clapping. It felt surreal. I enjoyed the moments and did a few dance steps albeit in a sitting position much to the dismay of my hubby. Duh!

The movie has Vijay written all over it. He is the ultimate savior; a do gooder, a one-man army, a sensitive soul who has equal amount of romance and dry humor in him! Where are such men in real life I ask? Sigh..

Does the movie has a story? Yes, it does but it gets undone by poor writing and poorer editing skills. To have a major star on board and still not enough chops to capitalise on it is blasphemy!