I was thrilled to get an autographed book from the author Yashodhara Lal or Y as she is fondly called for winning the contest on the hilarity of situation(s) in married life and had to agree with hubby when he commented "something good out of the lil mayhem ".   The fun part was hubby eyed the book as soon as it came home and we took turns in reading it. The moment I would put it down he picked it up and vice versa. We both finished reading the book roughly around the same time and agreed it was a pleasant read. 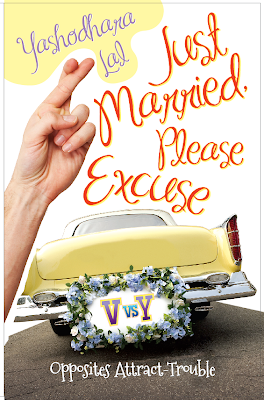 She is an IIM-B educated girl working in a MNC and He is a laid back dude working in the same company. That he is a couple of years elder to her does not deter the sparks that was bound to fly. Y's effervescent charm coupled with a quick tempered nature crosses path with the practical and witty side of V and after some quirky and interesting routine of wooing and dating, marriage is on the cards.

Did I tell you that they belong to very different backgrounds ? V is from a conservative Brahmin family in Jaipur while Y is from a Rajput clan and they set about winning their would be families. The meeting as narrated by Y is amusing and all is set for the D-Day.  What follows is how they evolve post marriage for life is seldom all fun. It is in fact a roller-coaster ride and the book showcases how the relationship matures with turn of events. Both the characters have to get used to each other’s quirks and mannerisms while living under the same roof. Then comes along a baby and their lives becomes topsy-turvy with myriad emotions ruling roost. The baby whom they uniquely nickname peanut brings in a whiff of sunshine and also brings along many revelations including their undying love for each other.

In essence, the book is all about how an young urban couple from different backgrounds meet, fall in love, get hitched, face whiffs of troubles and live life. It is an honest and straight from the heart account of Y and her life. The book is laced with subtle humor  as well as in your face guffaws. I laughed out loud at the non existent drumming skills bragged by V in his effort to woo Y, as well as the mediocre scissor wielding skills of Y executed on V.

What impressed me about the book was the lucid language and the conversational flow of the narrative. It is also interspersed with  Hindi phrases that brings a certain personal touch.Besides the protagonists, various other characters are immensely likeable like the doting Kajal & zareena, the spunky vivi and the immediate family.

I could relate to the emotions of the book at various points. The pangs of a first time mother is sensitively etched and so is the trauma of moving out of the city to a newer pasture. I appreciated the couple going for the marriage counselling as it highlights their efforts in making the relationship work.However,the tsunameee/earthquake incident at the fag end of the book sounded a bit dramatic and was not that amusing, though the event was instrumental in drawing the couple closer.

How can I not say anything about the lovable Y & V. They are modern and sensitive couple with a fun albeit a different take on life and priorities. Y is an independent woman and is a vibrant personality. She is fun loving though at times she comes across as slightly spoilt too.  However, her efforts in facing troubles is praise-worthy as is her yearning to be recognized for her true self.

V is this sensitive and caring dude who often lands himself in trouble for think- after-you-speak attitude. He is a loving hubby and a doting father. I loved the way he relentlessly made sure that Y overcomes her fear of driving. However, what surprised me was that a person with such a fun personality had to harbour negative feelings about the SMS from GARY. He could have simply asked Y as to who Gary was instead of sulking and becoming cold and passive. Nevertheless, V is fun !

The book from the debutante author never falters and manages to keep your attention till the end.You can relate to the couple and celebrate life with all its accompanying baggage. It ends on a positive note and that brings cheer.

"Ladne ki kya baat hain ? kabhi main maan jaati hoon, toh kabhi woh"
(What is there to fight ? Sometimes, I agree with what he's saying and sometimes he agrees with what I'm saying !) 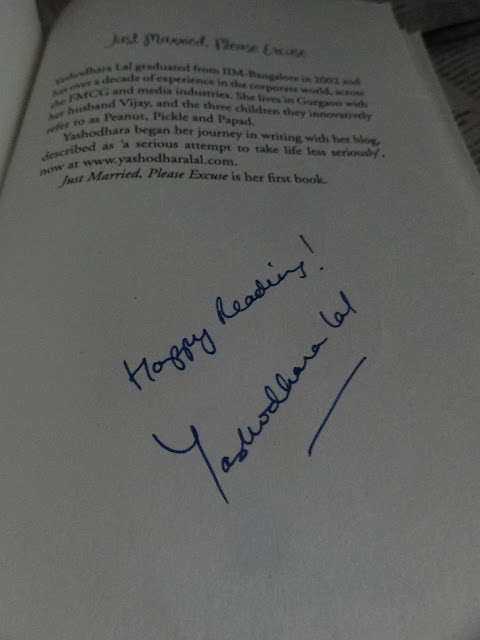 Posted by Priya Sreeram at 9:39 PM